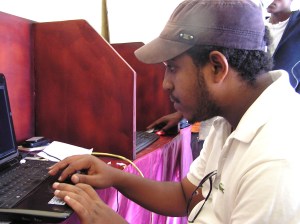 Shelter is one of the basic necessities to human beings. In the past Derg Regime, any citizen aged 18 years and above can acquire 500m2  plot of land with the least service fee of 50-100 Birr provided he/she is capable to construct; however evidences testify that those incapable are loaned from 7-14 thousand Birr for the apartment construction with 20 Years repayment schedule.

Currently, the citizens are being deprived of land ownership due to the policy that stated “Land belongs to the public & the government” following the proclamation “Land belongs to the government.” To the contrary, it seems that only members of the ruling party are beneficiaries of this system and other citizen are being dislocated from their habitat. Comparatively, the outstanding members of the ruling party are grabbing many houses and urban lands.

In 2005, the low cost condominium houses construction begun for low income citizens following the new government project. At that time, more than 470 thousand residents were registered in Addis Ababa only but the information disclosed by the city administration shows that only 72 thousand houses were allocated in the last 7 years.

This means that the government handed over houses only to 15% of the registrants in the past 7 years. The remaining registrants remain uncertain for when they will be getting their houses. The city mayor disclosed officially that there is no more registration for condominium houses at this right time.

Due to the drawbacks in fulfilling housing needs by Condominium construction, the new housing plan was currently put forward.

This new housing plan, called the 40/60, requires saving of 40% of the housing cost for five consecutive years. The remaining 60% shall be paid within 17 years after handing over of the house completing the 40% payment.

The city administration disclosed that these houses are intended for the low income groups without clue to the average low income of citizens. I went to the Central Statistics Agency (CSA) to look for the average income of citizens (as low, medium and high) via the ministry of Finance & Economic Development; the office informed me that even if they have data for the last five years, they cannot allow such data before permission from the ministry and approval of the foreign donors. That may be due to the myth, as one official told me in secret, that these offices are accountable to the donors and not to the public at large. I have calculated education level and average salary of government employees and put the fact forward.

The average salary of the lowest scale (guards & Laborers) and one year academic trainees is 800 birr, the master’s levels get 2500 birr and doctorate degrees get 3500 birr respectively. The above employees have such monthly deductions as income tax, pension funds, contribution for Abay Dam, EPRDF membership contribution which totals ranges from 15-20%.

Economists’ device that employees free from any addiction could save up to ¼ of his/her salary. The saving for emergencies and long term investments including house rent fees.

However, I would like to notify that the above calculations did not include the farmers and business people.

Generally, some residents in Addis Ababa City mention that they doubt the 40/60 housing plan fits the citizens’ capacities. Therefore, it is not clear up to now that, which the target beneficiaries will be.

Even though housing construction is very important, the target citizens and responsible government bodies are not known yet; some residents in Addis Ababa who need house told me that housing construction is a dire need but due to ambitious government expenditures, they suspect the plan is designed to compensate the lack of finances. They reasoned that besides the current inflation and high cost of living, they cannot pay the monthly saving amid the plan failed to consider citizens’ capabilities that lacks transparency and questioning the success of the projects.

Update፡   The above “40/60 housing project” article posted on March 2013. But after 3 months the Ethiopian government city construction and development ministry, within alternatives based on the city residence income automatically changed the project into 10/90, 20/80, 40/60 and 50 % saved before registration in the form of as an association. Finally, the new housing project implemented on June 20, 2013 because of failures of earlier 40/60 project.

Opposition political parties in Ethiopia are said to have been showing reservation to the Ethiopian National Transitional Council (ENTC), which has been working to overthrow the Ethiopian People’s Revolutionary Democratic Front (EPRDF) tyrannical regime that has been abusing, oppressing and exploiting its own people.

One ENTC leadership told this writer in an interview that although opposition political parties working in Ethiopia expressed their support to the Council (ENTC) — most of them have so far shown reservation to work together.

“When we formed ENTC, we had anticipated the joining of the other political groups under this umbrella. Hence the structure of the organization was designed in a bi-cameral way where organizations will have one wing with their voices and votes, and the public will be on the other end. To that effect, written invitations were sent to all the organized groups that are struggling for change in Ethiopia. Unfortunately, this did not work out as the opposition parties had some reservations even though they expressed support to the council”, he said.

The leadership, who said that the opposition political parties needed time to feel comfortable to rally behind the idea and join this new organization, said that —recognizing the problem —the general assembly of the council had passed a resolution in July 2012— to mobilize the public and, in the mean time, work closely with the other political parties and civic organizations.

“Accordingly, we are working together with other political parties in defining the roadmap and target around the alternative that ENTC believes yields success. Along with several other political parties and civic organizations, we have formed the “Joint Coordinating Committee of Ethiopian Democratic Forces” to help strengthen the cooperation. This committee is comprised of subcommittees and task forces which help develop the working relationships between the organizations”, he said.

The leadership also said that studying the past history of Ethiopian politics and assessing current political situations in Ethiopia, ENTC believed that along with the struggle for freedom— it was not too early to start thinking and planning of what was beyond.

“We believe that creation of an all-inclusive transitional government will help us have a framework and readiness that is required if the regime falls. In addition to that, having this institution beforehand will force the disparate political groups to work under one umbrella strengthening the struggle, hence two birds with one stone. Currently ENTC is calling for the formation of such an institution”, he explained.

The Ethiopian National Transitional Council (ENTC) was officially established in Dallas, USA on July 3, 2012, by Ethiopians from all over the world. It has been given the objective to overthrow the EPRDF regime and facilitate a peaceful transition of power to opposition political parties through participatory, fair, and democratic election.

Since its establishment, the council have done so many successful activities. For instance, it has managed to organize and mobilize Ethiopians that were part of the silent majority at the grassroots level in different local councils / chapters from all over the world including some in Africa. In addition, it has been doing meaningful works to influence western governments, which are the backbone of the tyrant regime in Ethiopia, to stand for the demand of the Ethiopian people.